When we bought Hullabaloo she had a pretty decent cruising inventory: AGM batteries, generator, watermaker, gennaker, bimini, cockpit tent, even a chain counter so you can tell how much anchor chain you have out without having to guess or count chain markers.

The main thing missing was solar. We were going to be away for a year and we like anchoring out so being able to keep the batteries charged without running the engine or generator was pretty important. We did a rough energy calculation and worked out we needed abut 300W of solar, the question was where to put it. On our boat the two main options were semi flexible panels attached to the bimini, or rigid panels attached to a stern arch. We wanted to set up davits for the dinghy so decided the arch was the best option for us.

Hullabaloo was in Venice at the time, and we had found it difficult getting work done there – we did ask the marina for a quote to fabricate and fit an arch but we’re still waiting for them to get back to us. There’s a company in the US, Fish On Sports, who make pre-fabricated arches. The shipping was almost half the price of the arch itself, but even then it was cheaper than having one made to order. Foolishly we decided to fit the arch ourselves. 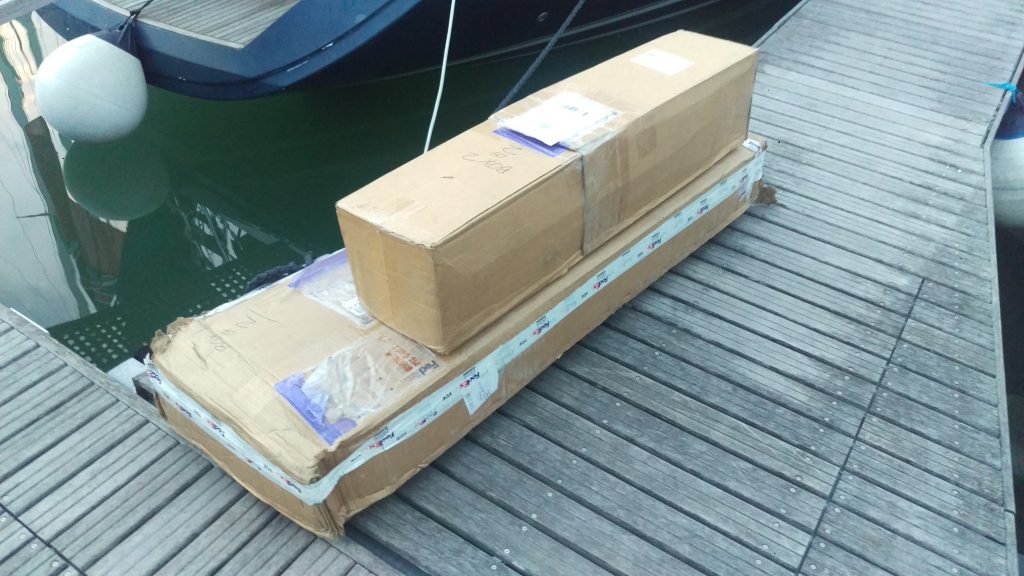 The arch as it arrived 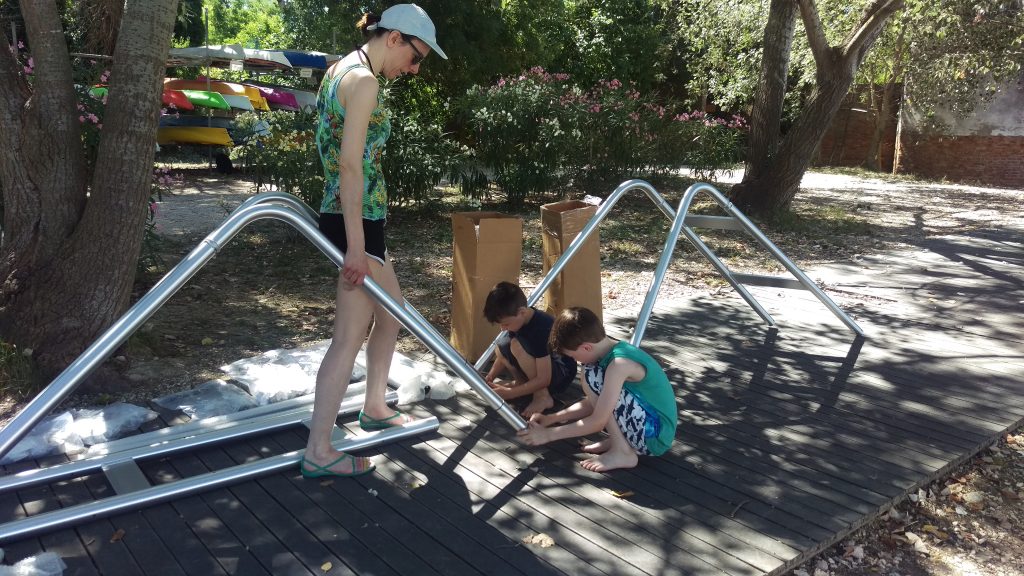 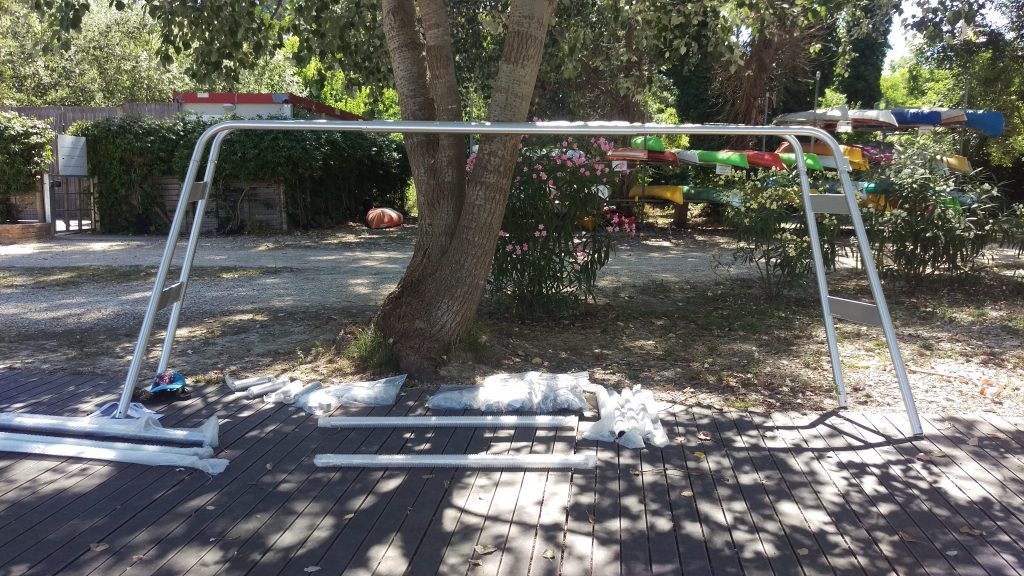 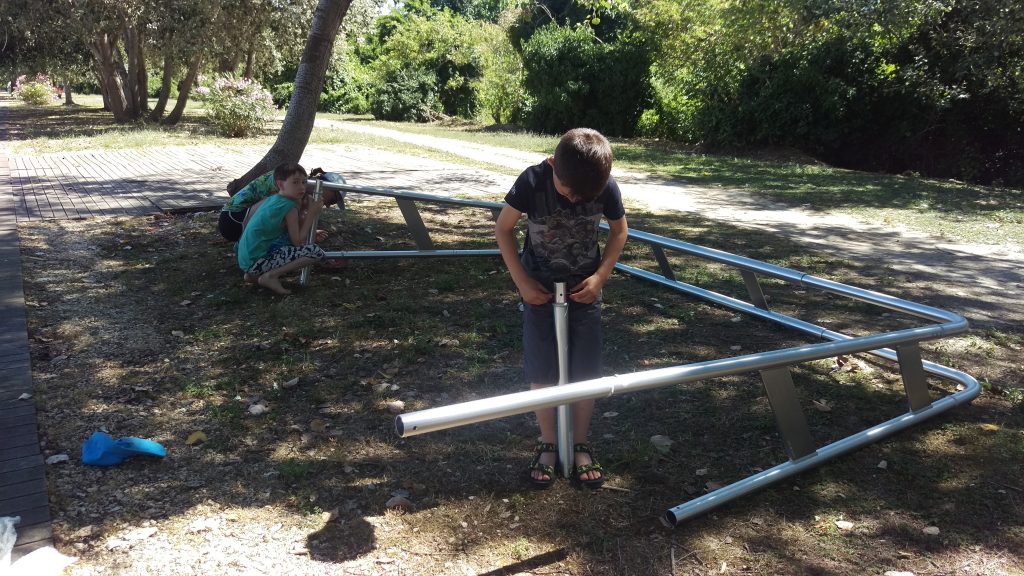 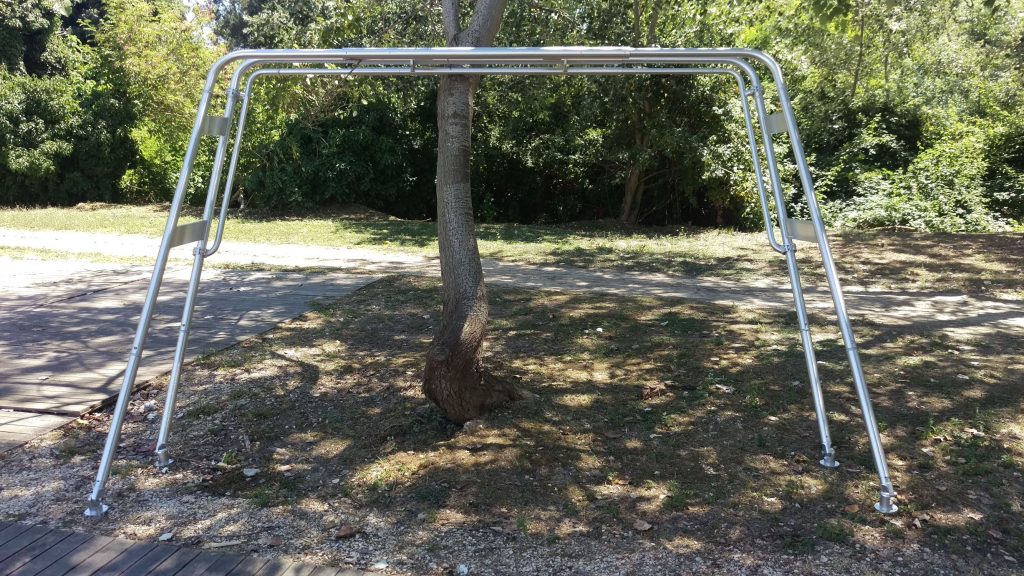 So start to finish it took a little over two hours to put the arch together. All we had to do now was fit it. We lifted the arch in place, supporting the weight on the topping lift. We then very carefully worked out the the position of the arch feet on the sidedecks. Most importantly we then crawled into the lazarettes to make sure there was space under where the feet were positioned for the backing plates to go. We were all set to drill our holes, but realised just before we did that the arch was going to be too close to the pushpit. No drama, we can move the feet forward a few inches. Great, problem solved. If only we’d re-checked where the backing plates would go.

We drilled the holes and Jennifer gamely climbed into the lazarettes to fit the backing plates. The rear feet were pretty easy – only requiring a few bits of cabinetry to be removed from the lazarette and a bit of mild contortion. Unfortunately, by moving the arch forward the front feet were no longer physically attainable by any human. We’d managed to position them just over the cavities for running cables through the boat. 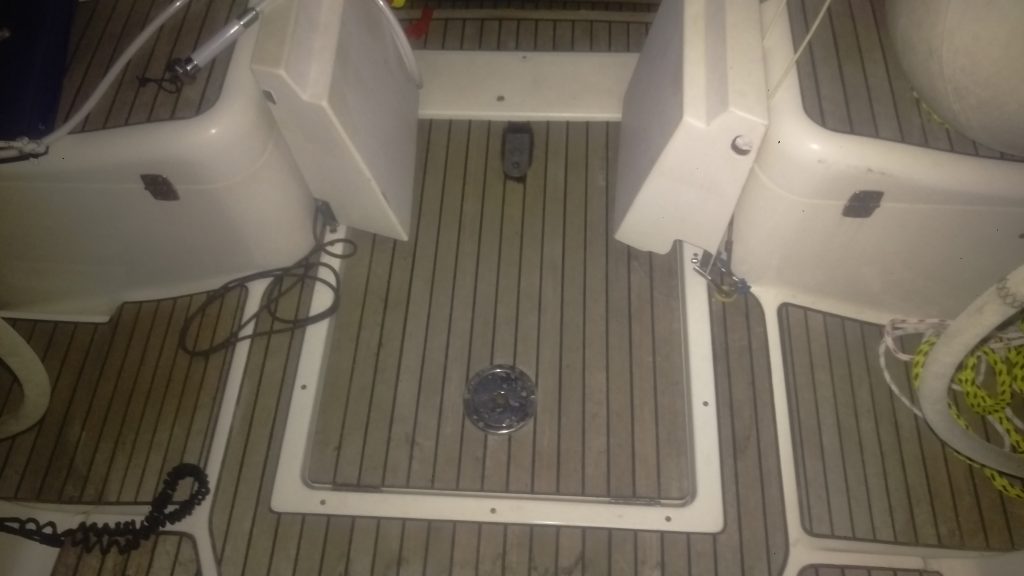 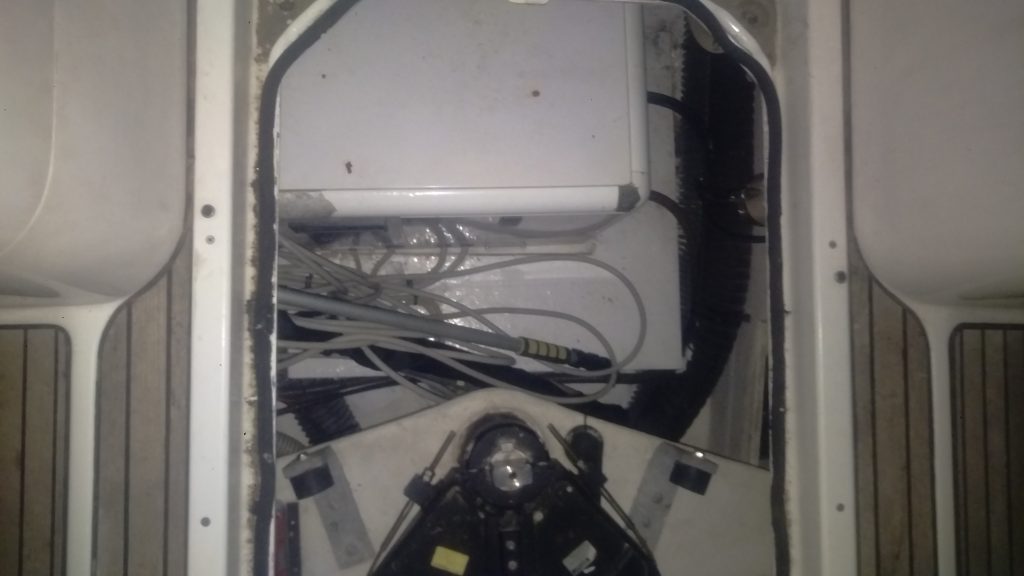 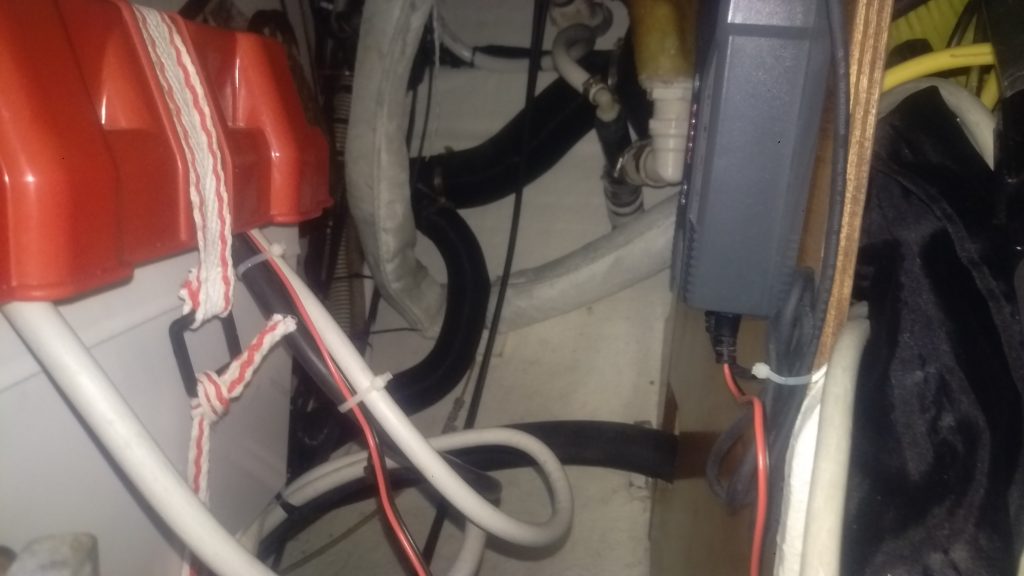 Not even sure what this space is called

Getting in to this cramped, hot, dirty space was pretty unpleasant. I couldn’t physically fit in. Jennifer could just crawl in but not stay in for long. That was the port side. The starboard side was even worse with more cables to get past and the water tank fill hose right in the way. Jennifer could just about see where the backing plate should go, but not see it and reach it at the same time. After two days we finally managed to get two nuts (out of four) on the port side, and one on the starboard. That last required the nut to be taped into a spanner and held at arms reach.

The two inner bolts on each foot were completely blocked by the structure of the boat so we decided to enlist some help to get the rest fitted. We figured it would be easier to get help in a marina in Croatia, so we attached the solar panels to the arch and left Venice for Umag the next day.

Umag
The Adriatic pilot (a guide to ports, marinas and anchorages) states that Umag marina has several facilities including a mechanics workshop. Whether this is true of not there certainly weren’t any engineers or mechanics available when we asked.

Rovinj
We stayed the night then headed a little down the coast to Rovinj, which the pilot notes “repairs to hull and machinery can be carried out”, and “extremely well-stocked chandlers at the marina”. Except when we arrived we found that the marina had been closed for almost a year for refurbishment.

Pula
We headed for Pula the next morning, it was pretty windy so we motored with a rather unpleasant swell until we go in behind Brijuni. Pula is a fairly large town, quite industrial with shipyards on the way in, so we thought we’d have a bit more luck here. The local yacht shipyard, Avangard, didn’t even call us back. With the help of the marina we managed to find someone to take a look at it. After 15 minutes crawling around and huffing and puffing he eventually declared it wasn’t possible, and left. Whether this has anything to do with the Croatia / England football match about to start, we don’t know.

Veruda
We’d now been in marinas every day, hadn’t sailed yet, and were getting a little dispirited with the ongoing problems. We headed out of Pula and into another marina, Veruda, just a couple of hours away. It was a little tight getting into our berth, but the marinero guiding us in and taking our lines was incredibly friendly, there was a supermarket (corner shop as we might call it) right next to us, and a nice pool just a few minutes walk away. We started to relax a little.

I went down to the marina service desk and ran through the list of possible suppliers with the manager – after several phone calls we finally found someone able to come and have a look the next morning, so we chilled out for the rest of the day. 9am the next morning the guys were at the boat – I showed them the problem, they shrugged a few times and called the boss. About half an hour later their boss was down, took one look at it and said “There’s only one guy in the marina that can fit in there! I’ll call him for you”.

Rajko turned up a couple of hours later. He was an absolute star and spent half the day crawling in and out of the boat; we finally got the arch securely bolted down, and he helped me run the cables for the solar.

All in it had taken us 6 days to get the arch fully fitted. 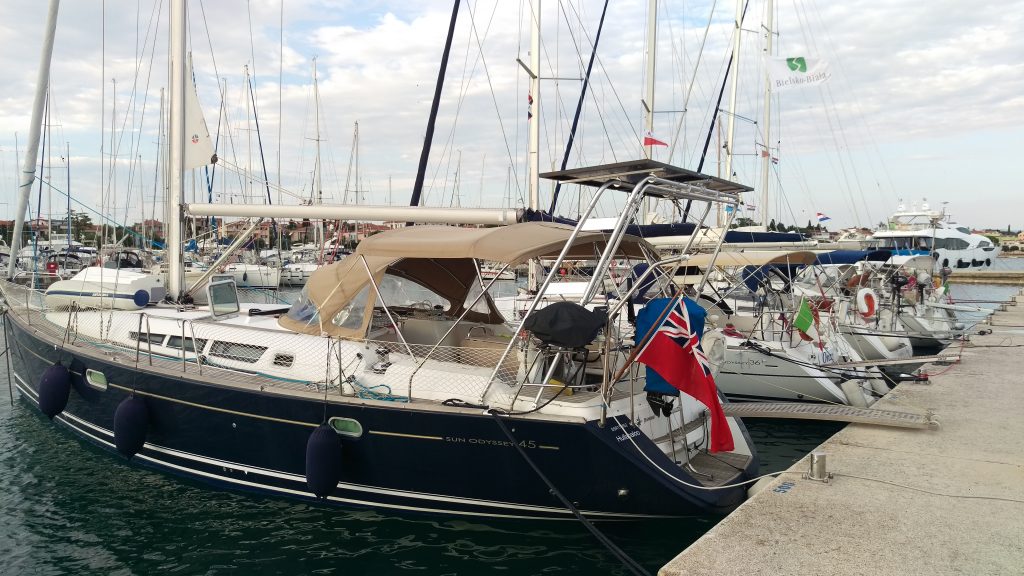